Trivia Question: True or False? Army and Navy nurses, all of whom were women, weren’t given veteran’s benefits and equal rights in the military until 1947, when they were granted officer’s status.

In WW2, all branches of the military accepted women into their organizations. Their role expanded from clerical jobs to driving, repair persons, lab workers, operators, parachute riggers, and air combat trainers (USO). 68,000 women served as nurses across the Army Nurse Corps and the Navy Nurse Corps – sometimes working on front lines, and sometimes being killed or taken as prisoners of war. Black women served as nurses overseas and stateside, and were continuously used as auxiliary forces that were called in so men could serve on the front lines when needed. In 1948 Truman signed an Integration Act that desegregated women in the Army and the Organized Reserve Corps where Black women had been serving without official recognition.

Interesting Fact: Aesthetically, in WW2, uniforms were skirts, and having hairdos, makeup and nail polish was emphasized, this is different from today when makeup, nail polish and skirts are not allowed (USO).

In 1948 (Before the Korean War) Truman signed an Act that allowed ‘women to serve as full, permanent members of all branches of the Armed Forces.” (USO) Truman also issued an executive order to desegregate the military and allow Black women equal service (USO).

In conclusion, Black women continue to face intersectional issues in the Armed Forces, but those who have served and volunteered since pre-colonialism paved the way for those who serve with full recognition and benefits now. Proportionately, Black women serve at a higher rate (in noncommissioned officers) than White women or Black Men, meaning they tend to stay in the service longer. The military can be a place of opportunity that civilian careers might not equal in the eyes of some Black women today (NABMW).

Like in every other aspect of life, the United State’s history of slavery, segregation, and racism plays an important role in the way Black women serve. But all the same, women will persist. 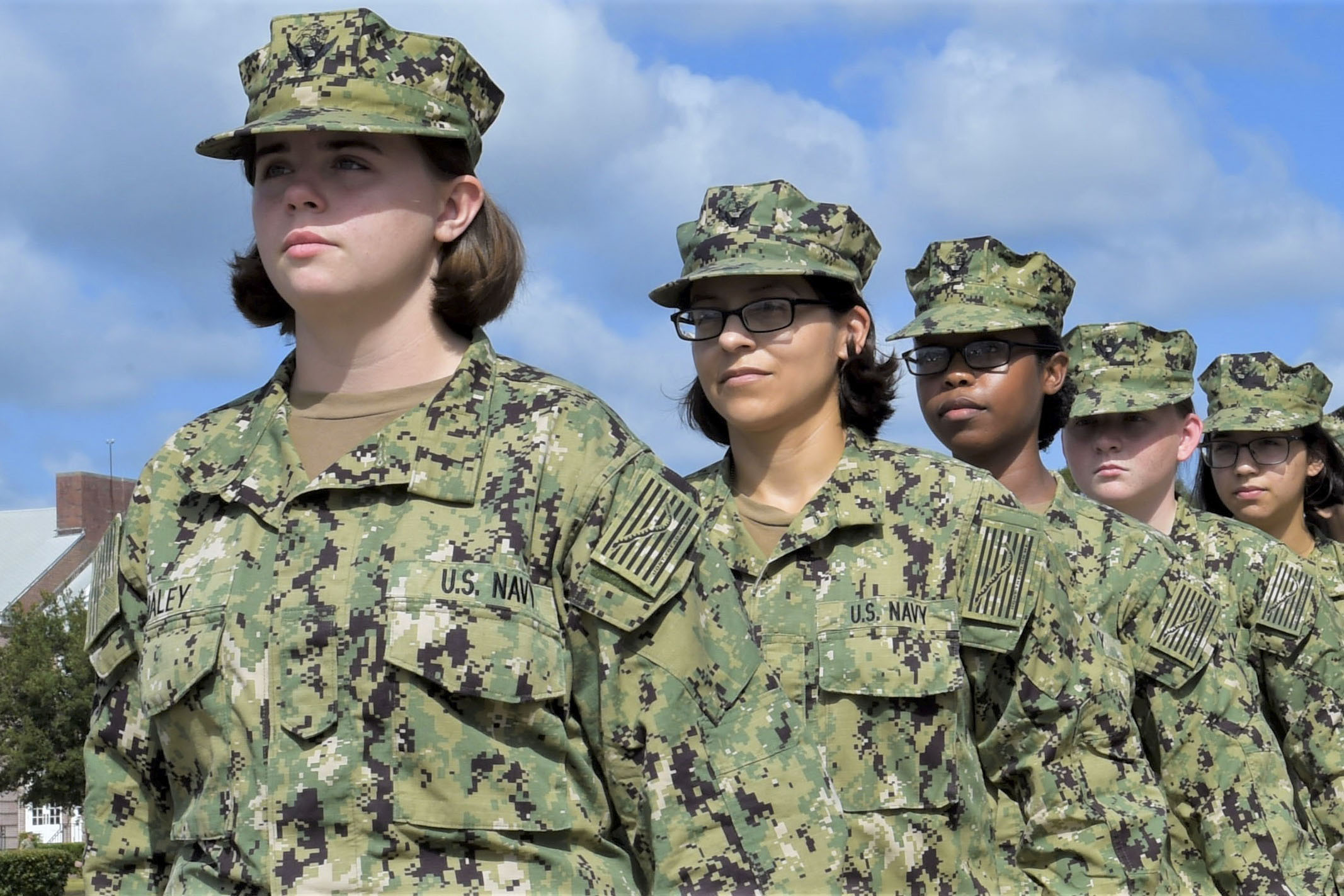 Note: I would love to write a part two about the history of queer people in the military, but as this is so long, I will refrain from including it in this blog. Stay tuned!

Trivia Question: True or False? Army and Navy nurses, all of whom were women, weren’t given veteran’s benefits and equal rights in the military until 1947, when they were granted officer’s status.

The role of women in the armed forces has only increased since the Revolutionary War in The United State’s history. The history of Black vs White women in the military has commonly been segregated, so in this article I try my best to elaborate side by side the roles and obstacles White and Black women faced as their service roles grew.

During the Revolutionary War, women traveled alongside soldiers and did cooking, cleaning, mending, and healing but didn’t participate in battle. There were exceptions of women who disguised themselves as men to serve. Notably Margaret Corbin kept fighting even after her husband was shot and killed. Black Women who were enslaved were brought into the house to help slave owners wives when their husbands went to serve in the militia. They also worked with men to build forts and served as spies under the promise of freedom after their service (NABMW).

During the Civil War, women grew crops, cooked, sewed, fundraised, and notably served as official nurses; about 3,000 women nurses worked for the Union Army. Historians estimate upwards of a thousand women also dressed as men to fight in the war.  Black women were also official and unofficial nurses and served in both Union and Confederate hospitals, as well as the Navy. Black women in the North were paid to raise cotton on plantations for the Union to sell. At first black and troops of color weren’t paid for their service, so their wives, black women and women of color had to support their whole family by laundering other soldiers’ clothing and making food to sell in the camps. Not until 1864 (3 years into the war) were black men paid fully (NABMW).

Before the First World War, the US Army Nurse Corps was formally established. This is a big turning point because women still didn’t have the right to vote, but they could officially serve in the US military. The US Navy also hired 12,000 women to serve as yeoman, who worked at desks, as operators and translators. The US Army Signal Corps also hired women to be telephone operators “3 kilometers from the trenches in France.” (USO) Black women were not allowed to be military nurses until after Armistice had been signed, and all were terminated from hire when the war was over. So Black women served in other ways during WW1 but were still not allowed full participation (NABMW).

The summer of 2020 has been one of reckoning. Calls for accountability can be heard from almost all walks of life. We want answers and responsibility. Congress announced it will be opening an investigation into Fort Hood, Texas to find out if the 28 deaths at the station this year “may be symptomatic of underlying leadership, discipline, and morale deficiencies throughout the chain-of-command.” As one may recall, Fort Hood was the location of the sexual assault, disappearance, and murder of Spc. Vanessa Guillen. While this action is long overdue, I can’t help but wonder what they will discover (if anything) that we don’t already know about sexual assault in the military. From the fiscal year of 2016 to the fiscal year of 2018, the rate of sexual assault and rape experienced by all Service members jumped by almost 40%, but for women the rate increased by over 50% to the highest level since 2006. The United States Department of Defense’s Sexual Assault Prevention and Response Office (DOD SAPRO) already claims to be providing a holistic approach to combatting this issue, while we see no significant changes. In the DOD SAPRO fiscal year report of 2019, active duty focus group members “… believe senior leaders are actively driving change in the field.” The report also claims that the climate is changing due to younger recruits with increased awareness of inappropriate behaviors: “Junior leaders are on the frontline of the fight to eradicate these problems in our units and must serve as role models in this effort.” While I agree with the need to educate young leaders in the force, problems seem to be stemming from them as well as more entrenched military personnel. The data collected by the DOD SAPRO from FY2019 and FY2018 both indicate that many sexual assaulters are at the victim’s grade or higher. “Of women who reported a penetrative sexual assault, 59% were assaulted by someone with a higher rank than them, and 24% were assaulted by someone in their chain of command” (FY2018). After reading these reports, I have several questions: What is being done to educate and hold higher ranking officers accountable? How can this specific investigation into Fort Hood improve the issues that have perpetrated and presented themselves in the military for decades? Overall, I will be pleased if this investigation helps end the apparent climate of violence in the military, yet I cannot say I am too hopeful. However, I’m tired of the lack of transparency, and I think it’s safe to say that we are all ready for answers.

As Japan’s total population declines, Self-Defense Forces has geared up to recruit more women. They have dedicated a portion of their 2015 budget to female-friendly programs, including building and improving daycare facilities on SDF premises, eliminating conventional mindsets about gender roles in the workplace, adding maternity dresses to the selection of military uniforms, and refurbishing the women’s bathing facilities. The SDF aims to create a family-friendly atmosphere that does not pressure women and families to leave after becoming pregnant. These efforts will hopefully increase the number of women in the Japanese military from the previous 5.6% recorded in 2013. For more information, visit qz.com.