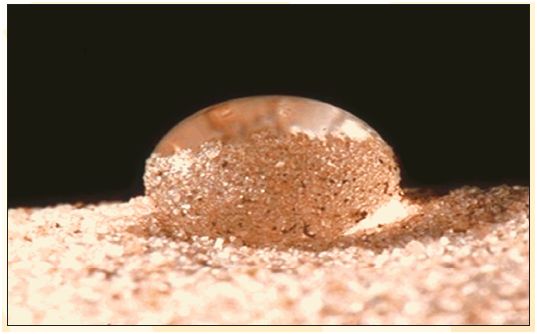 （source of the image: http://www.soilquality.org.au/factsheets/water-repellency)

The result of water repellence is generally uneven water distribution in the soil profile which leads to patchy and uneven plant emergence (figure 2). Moving from an alternately wet and dry soil can make it difficult to control the depth of sowing causing further problems with establishment (Blackwell, 1996). Water can remain ponded on the soil surface to be evaporated or lost as runoff. Lack of plant cover and heavy autumn or summer rains can result in significant runoff and erosion on sloping sites.

There are two main methods for measuring soil water repellency:

Hunt and Gilkes (1992) also described visual indicators of water repellence in the field — patchy pasture growth or crop emergence, early growth in depressions where water can pond, shallow wetting of the soil surface and water erosion. Staggered weed germination can also be an indicator of a water repellent soil.
As water repellence is related to organic matter, it is often confined to the upper soil layers, especially in minimum till systems. Standard sampling of the top 10 cm for analysis may “dilute” the water repellent layer, thereby skewing the results. For most accurate determination of water repellence the top 3 – 5 cm should be analysed.