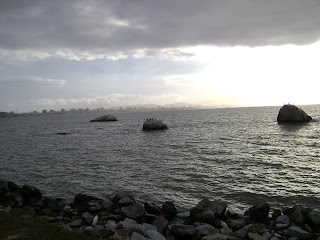 Two full months have passed since I first arrived in Florianopolis, Brazil. At the time of this writing, it has actually been 2-1/2 months. I have much to share about my study abroad experience thus far. Over the past two and one-half months, I have completed my first semester and started my second semester with the Universidade do Sul de Santa Catarina (UNISUL), lived with a host family, gotten ill from food poisoning twice and suffered a major asthma attack, learned many new things about the culture of Brazil in general and southern Brazil specifically, and have seen some of the most breath-taking views ever imagined. The following will be a synopsis of each experience.

International Study Abroad (ISA) and UNISUL – I give ISA much credit for making my transition to Florianopolis very easy. When I arrived in Brazil, an ISA staff person was at the airport to pick me up. They reserved hotel rooms for me and the other students arriving for the summer semester. Later, that evening, the ISA staff took us to a restaurant for dinner, at our own expense. Paying for dinner was not a problem for me because after the long flight from the US to Brazil, I was ready for an appetizing, nutritionally wholesome, good meal. Beginning with the second day, we “hit the ground running.” The few days prior to the start of classes were filled with orientations to the city and Brazilian culture and taking care of all the necessary business to settle us into life in the city, such as registering as foreigners, obtaining bus passes, paying taxes, etc. Without the help of ISA, I would have had to find out about many of the things required by the Brazilian government and how to basically manage in the city the hard way, through “trial and error.”

Classes – The first thing that I enjoyed most about the classes I took this past summer is that I was able to fully immerse myself in learning the Portuguese language. The textbook was limited in the information it provided. But, in all fairness, I believe the book was designed for an accelerated course. As such, the book provided a quick glance at enough Portuguese to get an individual by. Fortunately for me, I started learning the language before arriving to Brazil, so I knew what was missing from the textbook and was able to seek out material to compliment it.

Living with a Host Family – This has by far been my biggest challenge. I first need to say that ISA placed me with a wonderful host family and I also had a wonderful roommate. My roommate left the country around mid-August. There are many reasons that living with a host family presented a challenge for me. The primary reason is because my host family and I had different expectations. I wanted to stay with a host family because of the opportunity to hear spoken Portuguese by Brazilians and to take advantage of the many opportunities to speak the language and at the same time learn the language from the colloquial perspective. In my thinking, I did not anticipate the culture or personality differences that conflicted in many ways with my own culture and made living in the host family’s home uncomfortable for us all. This week I will move into my own apartment. It is actually a kitchenette. My experience living with the host family was good for me. Without that experience there are many things I learned that will help me settle more quickly into my new apartment. Also, when I was looking for an apartment, I was able to draw from my experience living in the host family’s home that helped me to know what to look for in the new residence and neighborhood.

Getting Sick While Living Abroad: Wow! Believe what you read or hear about the ability to become sick from food poisoning while living in a foreign country. Truthfully, a person can become infected with food poisoning anywhere. The first time I was infected with food poisoning, I was living in Washington, DC. The culprit was aged cheese beyond the expiration date. I knew the cheese smelled funny, but to me, all aged cheese has a foul smell. It happened to me twice during this relatively short period of time in Brazil and there was nothing suspect about either culprit. The first time was from eating a piece of coconut cake that was delicious at the time that I was eating it. Here comes the possible problem. My roommate bought the cake from a street vendor. My fear is that perhaps the cake was prepared with dirty hands. That’s just a hunch. I don’t know for certain.

My second bout with food poisoning occurred after eating lunch at one of my favorite restaurants. At many restaurants in Florianopolis, food is sold by the weight, Monday through Saturday. Lunch is served in most restaurants in Florianopolis from about 11:30 a.m. to 3:00 p.m., which means that the food is sitting out for that period of time, buffet style. I got to the restaurant around 2:30. My fear is two-fold. The first is that the food was left over from previous days and reheated several times and that the food had been sitting out for several hours.

My asthma attack was a work in progress. For a period of time, I realized that I was having problems breathing. I thought that it was just the climate. For a while, the medicine I brought from the US was helping to keep the asthma under control. However, the night before the major attack, I realized that I was struggling to breath and my medicine was not working. The next morning I went to the ISA staff and reported the seriousness of my problem. Everyone that I spoke with could hear that with every spoken word, I had to gasp for air. That same day, the staff coordinated an appointment for me with a doctor that specializes in respiratory issues. Unlike in the US, in Brazil, when a person becomes sick, that person goes to see a doctor that specializes in the area of the body where the illness occurs. This was wonderful for me because the doctor knew exactly what my problem was and what to prescribe to correct the problem. To date, I have been breathing and sleeping better than I have in the past six months. Keep in mind that I have only been in Brazil for 2-1/2 months.

Beautiful Florianopolis: During my first semester here, I wrote three blogs for ISA. The links are below. In the blogs, I talked about things I found interesting and added pictures to all of them. I hope you enjoy them.