We are #RooReady for fall semester classes. Learn more about the UMKC response to the global COVID-19 pandemic and get the latest updates and safety information from the CDC.

Harry Partch (1901­–74) is one of the most inventive and influential American composers of the 20th century. Musically self-educated and influenced by a wide variety of world cultures, Partch developed his own philosophy of music that worked toward an integration of all the arts.  He also created more than 40 new musical instruments that are widely recognized for their structural as well as musical beauty.

A collection of these unusual instruments will be at UMKC for this exciting residency.

Apart from eight years living as a hobo, Partch lived most of his life in his native California and in the Midwest. He never taught, relying for support on grants and contributions, revenue from concerts and recordings of his Gate 5 Ensemble, and odd jobs. That he managed to fashion a cohesive creative world completely independent from the musical and institutional systems that supported most composers remains one of the 20th century’s great accomplishments.

The Conservatory is bringing a collection of Partch’s instruments along with nine performers to Kansas City, February 13–22, 2019. Over the past five years, Partch’s music has received increasing attention, including performances at New York’s Lincoln Center, in Germany, a Grammy Award, and a monograph on Harry Partch by UMKC Conservatory faculty Andrew Granade, a leading expert on Harry Partch. Alumnus Luke Fitzpatrick will perform on Partch’s string instruments, and he is one of only a handful of people who can perform on these instruments. UMKC Conservatory dance students will perform on the February 22 concert.

Residency Schedule. All events are free and open to the public.

(all events in Pierson Auditorium unless otherwise indicated)

5:30-7pm: Microtonal Sound Meditation, 1900 Building
*The Restaurant at 1900 Building will be open after the event. Please consider making a reservation!

This program is supported in part through funding from:

During its residency, the Partch Ensemble Instruments will be housed at Pierson Auditorium in the UMKC Atterbury Student Success Center. Partch Ensemble performers will give demonstrations and host classes from UMKC and the Kansas City Art Institute. If you would like additional information on any of these events, please contact Andrew Granade (granadea@umkc.edu) or Paul Rudy (rudyp@umkc.edu)

Pulitzer Prize-winning composer Jennifer Higdon returned to the UMKC Conservatory for the second year of her Barr Institute Laureateship, April 19–25, 2018.

During her April 2018 visit, Dr. Higdon worked with Conservatory students in a variety of ways.

Jennifer Higdon is a major figure in contemporary classical music, receiving the 2010 Pulitzer Prize in music for her Violin Concerto and a 2010 Grammy for her Percussion Concerto.  She has been nominated multiple times for a Grammy.  Higdon enjoys several hundred performances each year of her works, and blue cathedral is one of America’s most performed contemporary orchestral works, with more than 600 performances worldwide since its premiere in 2000.  Her works have been recorded on nearly sixty CDs.  Higdon’s most current project was an opera based on the best-selling novel, Cold Mountain, by Charles Frazier.  It was co-commissioned by Santa Fe Opera, Opera Philadelphia and Minnesota Opera in collaboration with North Carolina Opera.  Most recently, Higdon won the International Opera Award for Best World Premiere.  She holds the Rock Chair in Composition at The Curtis Institute of Music in Philadelphia.  Her music is published exclusively by Lawdon Press.

Jennifer Hidgon’s appearance is supported in part through a grant from The Patricia and Howard Barr Institute for American Composition Studies at UMKC.

Pulitzer Prize and Grammy winning composer Jennifer Higdon returns to the UMKC Conservatory to work with students and faculty throughout the Conservatory.  On this visit she visited Prairie Star Middle School, Leawood, Kansas to work with the band students to perform her Rhythm Stand.  The students then performed the piece in a side by side concert with the Conservatory Wind Ensemble, directed by Joseph Parisi.  The students were thrilled to have the opportunity to interact with Dr. Higdon.  They were able to ask her questions ranging from the professional to the personal; all of which she answered with great insight and empathy.  This visit also lead to different collaborations between Dr. Higdon and faculty and some of the Conservatory students.  These kinds of rich, organic experiences are part of the ethos and mission of the Barr Institute.  Our Barr Institute Laureates, including Stephen Hartke, John Corigliano, Steven Stucky and others have had a profound impact on the students and faculty at the UMKC Conservatory. Photos of Jennifer at Prairie Star Middle School, Leawood, KS, by Brandon Parigo, below: 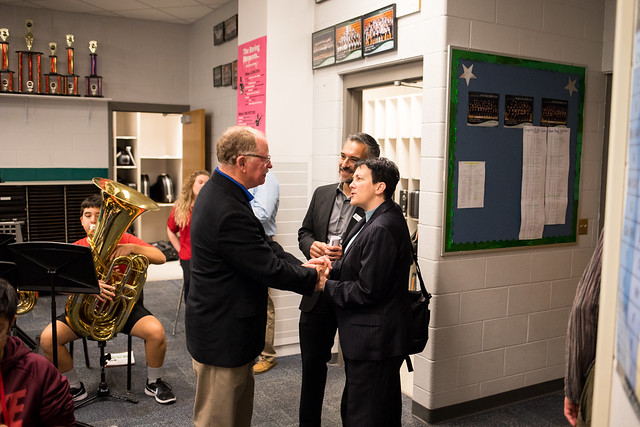 Here is a sample of Dr. Higdon’s residency schedule, below. 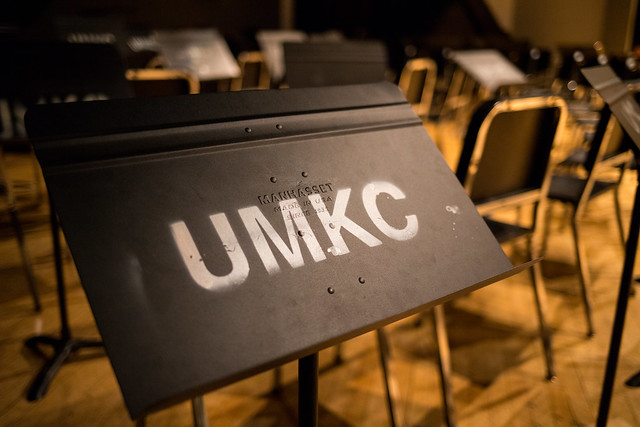 Thur, 3/16/17
2:40-4 PM Dance Collaboration critiques
6 PM LGBTQ+ Lecture followed by reception.  Jennifer’s talk is Inspiration Through Love, This will be a discussion about the history of gays, lesbians, and women in classical music, and how things have changed over time, as well as how identity has affected and inspired the making of art. UMKC Student Union 401BC

Jennifer Higdon’s Residency is made possible by The Patricia and Howard Barr Institute for American Composition Studies at UMKC.

September 27–30, Pulitzer Prize winning composer Jennifer Higdon, our Barr Institute Laureate visits the UMKC Conservatory to work with students and participate in performances of her work.

Jennifer Higdon’s Residency is made possible by The Patricia and Howard Barr Institute for American Composition Studies at UMKC.

photos with the Percussion Studio

These programs are supported in part through a grant from the Patricia and Howard Barr Institute for American Composition Studies at UMKC.

This program is supported in part through a grant from the Patricia and Howard Barr Institute for American Composition Studies at UMKC.

October 28–29, Carol Oja, Barr Institute Scholar, is back at the Conservatory for lectures and to do her own research in UMKC’s Miller Nichols Library Special Collections.

March 16, 2015 Q&A with John Corigliano, guest composer, Tivoli Theater, 4050 Pennsylvania Ave, Kansas City, MO. The Tivoli shows excerpts of all three Corigliano films, in cooperation with the Conservatory and the Film Studies program at UMKC.  Andrew Granade and Paul Rudy are the Conservatory moderators for this, and UMKC’s Tom Poe and Caitlin Horsmon represent Film and Media Arts. 7 p.m.  FREE

March 17–20, 2015 Spring Opera, Little Women, by Mark Adamo, 7:30 p.m., WRH.  The opera is based on Louisa May Alcott’s book by the same name, about growing up in New England after the American Civil War. Little Women was commissioned by the Opera Studio of Houston Grand Opera. Tickets: $12, $10 seniors, UMKC faculty, staff, and all students FREE with UMKC or student ID. Click here to see photos. | Click here for more photos. (2 different casts)

Mark Adamo’s residency is supported in part through a grant from The Patricia and Howard Barr Institute for American Composition Studies at UMKC.

March 18, 2015 A concert of music by composers John Corigliano and Mark Adamo. 60 minutes of music performed by Conservatory faculty and students, plus at least one special guest performer from the KC Symphony, followed by 30 minutes of Q&A with the composers.  Dean Witte will moderate. 5–6:30 p.m., The Nelson-Atkins Museum of Art, FREE but tickets required: nelson-atkins.org. | Click here to see photos.

January 28-February 2, 2014:  Barr Institute Laureate John Corigliano residency, including three performances of Corigliano’s Percussion Concerto by the Kansas City Symphony with guest soloist Martin Grubinger, as well as a lecture hosted by The Nelson-Atkins Museum of Art, Thursday, January 30.  Other events at the Conservatory will be scheduled soon.

March, 2013:  Poster session presented by UMKC graduate students in the Musicology program on the life and music of Paul Creston at the Society for American Music’s National Conference.

June 2012:  Residency of Barr Institute Laureate Stephen Hartke, including three performances of his commissioned work  The Muse of the Missouri by Michael Stern with the Kansas City Symphony.

April  2012:  Residency with Barr Laureate Stephen Hartke, including a performance of The King of the Sun by the Musica Nova ensemble.

Gala opening of an exhibit of materials from the Paul Creston Collection at the Miller Nichols Library, designed by graduate students in the Musicology program at UMKC.